Tuesday, November 19, 2013
LEFT-BRAIN V. RIGHT-BRAIN: IS IT ALL JUST HAREBRAINED?
I took a stupid little Facebook quiz the other day, which purported to determine whether I am right or left-brained. As someone who has always considered herself mostly right-brained, but also strong in some left-brain activities, the quiz should have been a 'no-brainer'. 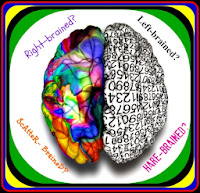 This morning, I went onto Twitter to actually read an article I had 'favorited'. (A new daily ritual) I chose an article about ADD and dyslexia. The opening line was, "What if ADD and dyslexia are not disabilities?" It was an interesting article, but I didn't agree with some of it, so I read all of the comments.  One particular comment caught my eye, because the author stated that there were "a few inaccuracies" in the article.  He went on to say that "the idea that there are right and left 'brain' people is a myth which any psychologist will tell you."  He then offered a link to an article in Psychology Today, which of course, I clicked on and read immediately.  Apparently, the universe had intervened to hasten my research on this topic.

After reading the article, my appetite and curiosity were whetted, so I googled it and discovered that this subject has just very recently been in the news!  I read of few of the article and bookmarked some to read later.  I must confess, I was relieved to learn that the research has revealed that the distinction between right and left brained people is, in fact, a myth.  Here is a link to one of the articles, in case you would like to read it:  IT'S A MYTH

This is only the beginning of my research on this topic, since I find it inherently fascinating, but also because I'm intrigued by the psychological and sociological implications.  I mean, why was I actually ticked off that a stupid little Facebook quiz and someone who knows me pretty well believed that I am mostly left-brained?  More on that in another blog; this topic has many facets and I plan to delve into them, with BOTH sides of my brain.